Some of my favorite images are not necessarily my best images, but they remind me of a wonderful experience. And for me, that's one of the most important aspects of photography. After returning from our recent trip to Florida and Everglades National Park I decided that it would be fun to write a little bit about these special times.  Here is my first attempt.  I hope that you enjoy it.

An anhinga slips quietly into the waters of an old irrigation ditch filled with reeds on the Anhinga Trail in Everglades National Park.  Because the anhinga’s feathers are not waterproof, its body is submerged with only its long neck sticking out above the water.  At first glance, the submerged anhinga looks like a snake about to strike giving the anhinga its name, which in the Brazilian Tupi language means snake bird, a name that it is also commonly called. 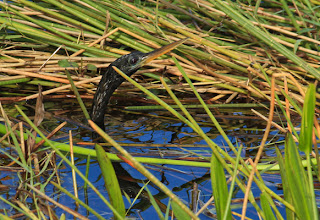 Having spotted what I first thought was a snake and then realizing it was an anhinga, I watched as the anhinga dove its head into the water looking for fish. The anhinga moved slowly along with its head submerged, resurfacing every 15 seconds or so.  Several times it was successful and had speared a small fish.  The anhinga would then flip the fish into the air, grab it and swallow it down head first. 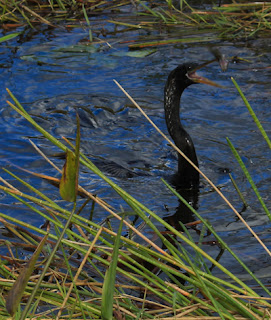 After several more unsuccessful tries, the anhinga came up with a larger fish, too much of a find to risk flipping it in the water so the snake bird quickly swam over to the bank, got out, and then swallowed the fish.  It took several seconds for the fish to make it all the way down the anhinga’s long neck. 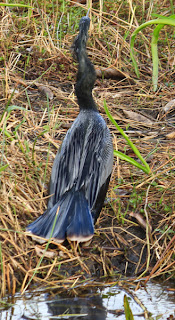 Apparently breakfast was over because the anhinga then climbed out on a branch and spread its wings so its beautiful black and white feathers could dry. 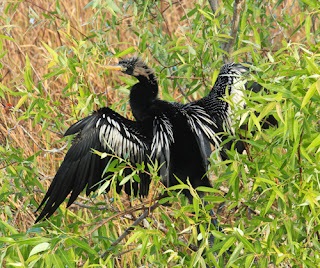 Posted by Tom and Pat Cory at 5:50 AM No comments:

Tom and Pat Cory
We love nature, travel, photography and teaching so about 25 years ago we looked for a way we could spend more time with our passions and Cory Nature and Travel Photography was ‘born’. We have been fortunate to have traveled many beautiful places, seen a number of different cultures, and met many wonderful people along the way. In addition to our own travels, we continue to offer a variety of photo workshops and photo tours as well as individual lessons. We have written 3 books, Notes from the Field, our instructional book, Scenic Chattanooga and Beyond, our book of photographic opportunities around our home, and Gently Touch the Earth, a book of some of our favorite images along with some of our favorite quotations. For many years we have sent out a quarterly newsletter with interesting tidbits of information that we have run across. Our intent is to continue that tradition but also enhance it a bit with our blog. We hope that you will enjoy it.